"This book tells that story. In essence, it offers an impartial evaluation of an important social
phenomenon that began to stir millennia ago. And if I may, it is the first to do so."

"Yoga’s claims of aerobic excellence got caught up in that kind of reactive cycle. A large assertion had
been made and had received considerable public notice—that yoga alone is sufficient to achieve
cardiovascular fitness.
The claim was big and so were the stakes. If true, yoga could enter the pantheon of activities that global
authorities had identified as vigorous enough to produce the array of cardio benefits—to raise stamina
and lower the risk of heart disease, diabetes, cancer, and many other diseases.
From a business angle, the claim was pure gold. It could turn a simple form of exercise requiring no
costly equipment or investment into a dazzling profit"

"A couple of years ago, when I had just returned to Yoga Journal after six months of traveling to ashrams and holy sites in India, I got a call from a writer for Mirabella magazine who was researching a fashion spread on exercise wear.

"I was wondering" she said, "what is the traditional outfit for doing yoga?"

I thought of the naked yogis I had seen on the banks of the Ganges, their skin smeared with ashes from the cremation pyre to remind themselves of the body's impermanence, their foreheads painted with the insignia of Shiva, the god of destruction. I couldn't resist.

"Well, traditionally, you would carry a trident and cover your body with the ashes of the dead," I told her.

There was a long pause, during which I could practically hear her thinking, "This will never fly with the Beauty Editor." Finally I took pity on her. "But alternatively," I said, "a leotard and tights will work just fine."" 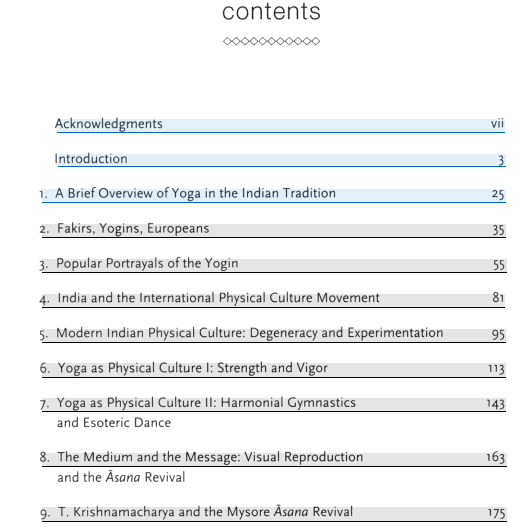